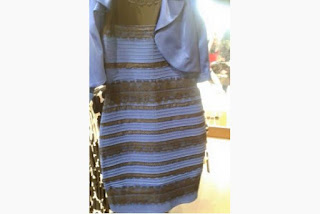 I'm not entirely sure what I can learn from this incident. Maybe somebody needs to make a piece of ambiguity software we can run our work through. Safe to say, I'll be checking the opening paragraph of my next novel even more carefully. I think perhaps though, the whole episode can be summed up in four words: win some, lose some. Oh, and I still can't see that dress as black and blue, even though I know that's exactly what it is.
Posted by Chloe at 15:03