On Losing the Plot

Do you ever get moments when your writing comes to a complete standstill? It's not writer's block exactly - you know where your plot is going - it's more like you just have no idea how to get there. There is a plot, you've just lost it. I suffered from this recently with my novel-in-progress, Thousand-Word Things. 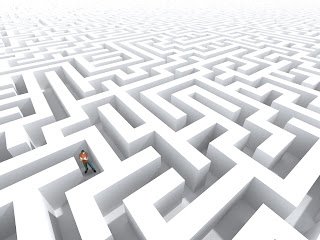 I have just got back from Vancouver. My husband needed to go over for a couple of weeks to help out with a work project and so I tagged along too and the lovely folk at Deviant Art found me a desk in the office so that I could work on my novel while Paul was writing computer programs. For the most part, I found it productive to be working in an atmosphere where everyone else was working too, but for a while I did lose the plot somewhat. Having worked through this - thanks partly due to a timely pep talk from my American friend, colleague and talented writer Andy Stewart - I got my fingertips on to the edge of the plot, only to realise that in finding it, I had lost the art. The story was moving on but with no finesse, no beauty, none of those sentences that have you smiling long after you've finished the chapter.

So, at the moment I feel like I only have a tenuous grip on the plot and no grip at all on the art of writing. But apart from that, it's going well! I'm glad we don't have to get things right on the first draft, aren't you? Imagine if you were judged as a writer on your first drafts. Stuff of nightmares, right?

Usually, I'm the sort of person that can only work on one thing at once. But in Canada I found it refreshing to spend an hour here or there tidying up a few short stories. Editing can be a nice change from writing. Thus, I have managed to enter a couple of little competitions in the last few weeks, including the one run by ChocLit publishers. The challenge here was to write a story with the central theme of chocolate. Not a very inspiring subject, is it? That's exactly why I thought I should give it a go! Quirky challenges are good for the imagination. I'll let you know how I did when the results are out.

I have been hoping to find paying markets for short stories. I enjoy competitions but it would be nice to feel like I could get some professional work. Most SS markets seem to be quite niche though. There's a very healthy women's magazine market and a fairly big science fiction/fantasy/alternative market, but not much for general fiction. Those magazines that do take general fiction tend to be very literary and feature work from established authors which intimidates me into not submitting anything to them! Perhaps online magazines are the way forward? Any advice on the matter from people who have been there and done that would be greatly appreciated - I'd like to feel as if I'm branching out a little in 2012!
Posted by Chloe at 14:49 10 comments:

Happy 2012 everybody! This is the blog post where I should probably give you a list of my resolutions for the year. But I don't have any, so I won't. My current goal however, is to turn the trash I churned out in November for NaNoWriMo into a proper novel. Preferably by the end of March (for the first draft anyway!).

Of course, I could have made the process a bit easier for myself by not including things in my novel that I know nothing about. Some of these things - anencephaly and persistant vegetative states, for example - can be introduced into the book by means of an afternoon on Wikipedia (plus half an hour on some other websites just to verify facts!). But others are not so simple.

There's one strand to the story - which I won't mention here as it rather gives away a vital part of the plot - that is going to be a headache I can tell. Mainly because it involves economics and banking and things which I have no head for at all. I do not understand the stock exchange. I'm pretty sure it's evil.

However, the biggest area of research is abstract art. Note to self: do not centre a book around a character who is an abstract artist if you barely know what that is. While good ol' Wikipedia has been a faithful friend once more, I really needed to get a greater depth of insight. After all, this man lives and breathes this world. I need to have a good working knowledge of it. Readers aren't stupid, they know when you're winging it!

The post today brought me a (hopefully) good guide to the world of abstract art so I am currently immersing myself in Kandinsky, Malevich (don't get me started on him!), Suprematism, Dada, Rene Magritte and countless other people and movements.

Never having written a "Serious" novel before, having to research things is a bit of a shock. Fantasy worlds bring their own challenges, but at least nobody can check your accuracy on google! Having said that, I'm getting quite into it. And, you know, if I can't ever face learning so much about a subject again, I can always make all my main characters abstract artists from now on.

Where do you stand on research? Love it? Loathe it? Do you like it when books contain details of things/places that are alien to you, or are they a bit too much effort to read?
Posted by Chloe at 18:08 4 comments:

Labels: research, thousand-word things
Newer Posts Older Posts Home
Subscribe to: Posts (Atom)
I'm represented by David Haviland at The Andrew Lownie Literary Agency. My novel, The Art of Letting Go, was published by Thistle Publishing in July 2014. Get it here!
Find out more at chloebanks.co.uk, hunt me down @ChloeTellsTales, or talk to me directly: hellochloe@chloebanks.co.uk