After a few months of wading, I have finally made it through A Suitable Boy by Vikram Seth. It was brilliant. I was completely daunted by it - being the longest novel written in English and all - but I now fully agree with The Times: "Make time for it. It will keep you company for the rest of your life." 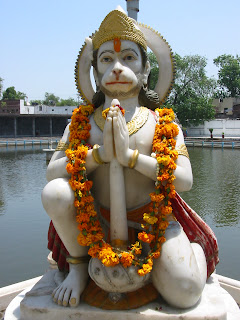 I have to admit, I often find books set in places and times I know nothing about a bit off-putting. It takes all my energy to understand what's going on rather than enjoying the plot. However, despite knowing next-to-nothing about India in the early 1950s, it was wonderful. There were some long sections detailing debates in the Indian parliament that I didn't get on with so well, but the rest was fantastic. I don't think it's giving too much away to say that one of the main plotlines is about finding a suitable boy for a character called Lata to marry and I think one of the best features of the book is that the three young men who end up in the running are all likeable. That goes for all the characters really (and my goodness there are a lot of them and they're mostly related to each other somehow!) - they are all flawed and nearly all likeable in some way or other; i.e. they are like real people! I didn't understand all the cultural references, especially regarding Hindu and Muslim traditions, but it didn't seem to matter too much.

The ending seemed to me to be really sudden, but I quite liked that. It didn't feel like this massive cast had been invented for my reading pleasure, but rather that they were real people and I had just dropped in to witness one particular period of their lives. Although many loose ends were tied up, not all of them were - the lives of the characters continued on past where I stopped reading. In a way this was frustrating, but if Vikram Seth had written it otherwise I think it would have ruined the magic.

One interesting coincidence is that Paul and I have just started to sponsor a child. We said we didn't mind where he or she came from and we were therefore allotted a lovely little girl in India. The charity we are with sent some information about the work they do in the country and it turns out that they started working there after meetings with (then) Prime Minister Pandit Nehru - who is a character in A Suitable Boy! It hadn't really occurred to me until then that at least the outline of the politics in the book must be true.

I have reached a milestone in my novel rewrite: the "so-close-to-halfway-I'm-going-to-say-I'm-halfway-just-to-encourage-myself" point. I'm halfway(ish)! It's been pretty plain sailing so far. I've had a bit of fun making things more quirky and adding some neat lines. That's the brilliant thing about writing - unlike all those situation where you wished you had said something wittier/smarter/more poignant and then thought of the perfect retort two hours later, with writing you can go back and say it! Obviously it doesn't do to have your characters come out with perfect one-liners all the time, but one or two thoughtful bits of speech can reveal more about a character than three chapters of watching them faff about (not that my characters do too much faffing - I hope).

The main challenge so far has been to add bits of extra scene-setting (as reccomended in my critique) but not add anything to the word count. Actually, I'm feeling pretty smug as I have cut the word count by about 1100 words so far. However, I have a lot more to stick in later and really don't need the novel to be any longer than it is, so I shall be getting increasingly ruthless from now on. More cutting before more sticking! It's amazing how easy it is to find wasted words (or it is in my writing anyway!) all over the place. Why would I have written,"Rowan reached over and picked up the sword...", when I could have written, "Rowan picked up the sword..."? I confound myself sometimes.

So I have another few chapters before the head-hits-desk bit comes and I have to start re-working sections completely. This week I have done the bit that I always found really depressing to write, but that everyone said was the best bit. Instead of taking me two weeks, it's only taken me two days this time and I actually enjoyed it! Hooray! However, between pages 55 and 160, I had three comments on my critique and they're all positive. Whereas, between pages 160 and 175 I have four comments and they're all... shall we call them 'suggestions for change'. I've just been working on the positive bit and I am rapidly approaching page 160. Probably best you don't ask how it's going for the next week or so...

In brief other news: I am very happy to have received my copy of the anthology and to see that my story is the opening one (and no, it's not alphabetical by author if that's what you're thinking!). I've read the other stories and they're all so different! There are some really good writers in it. I am also only 200 pages away from finishing the epic "A Suitable Boy" and still enjoying it. Happy reading, writing and blogging everyone!
Posted by Chloe at 17:17 3 comments:

Labels: children's novel, cutting, editing, milestones, re-write, reading
Newer Posts Older Posts Home
Subscribe to: Posts (Atom)
I'm represented by David Haviland at The Andrew Lownie Literary Agency. My novel, The Art of Letting Go, was published by Thistle Publishing in July 2014. Get it here!
Find out more at chloebanks.co.uk, hunt me down @ChloeTellsTales, or talk to me directly: hellochloe@chloebanks.co.uk