On Tuesday I went to the award ceremony for the People's Book Prize. It was a black-tie affair at the grand Stationer's Hall in London and I was one of 12 writers shortlisted for the fiction category for my novel The Art of Letting Go.

First things first, I didn't win. My category was won by The Road to Donetsk by Diane Chandler. This however, was a minor detail. I had a fabulous time! I am not the sort of person who does black-tie or socialising and especially not networking, so it wasn't the kind of event I would've said suited me at all. It was brilliant though - a complete change from everyday life. I spend all my days looking after a two year-old and a baby and I'm usually in old clothes covered in various stains and bits of rice cake. When people talk to me it is usually about my boys. That's fine, I love them dearly, but it was indescribably wonderful to be more than Digory and Wilfred's mum for a few hours.

When we arrived at the Hall, Paul and I felt out of place and introverted. Because of the need to put my baby to bed I'd missed the rehearsal and was armed only with a copy of my book and a list of nerve-wracking instructions as to which hand I was meant to hold my novel in on stage and how long an acceptance speech was allowed to be. The TV cameras were all set up* and everyone looked so elegant and at home. Within a few minutes of arriving however, a woman came sweeping over to tell us that we looked so young and she simply had to talk to us as we were the most beautiful people in the room. After that we felt a bit more at ease - especially when we realised nobody else knew which cutlery to use or whether the flowers on the starter were edible! (The woman in question turned out to be Lois Letts - the wife of the Daily Mail columnist Quentin Letts. Quentin was shortlisted for the same award as me and he won the award for debut novel.) It was fun and uplifting for me to spend an evening talking about books and publishing with other authors, agents and publishers. It was wonderful to spend more time with my agent than the few seconds it takes to read an e-mail. It was encouraging that people were interested in me as a writer.

A few people have asked me if I'm disappointed not to win. Of course I would have loved to win - not just for me but for my agent and publisher and husband and all the people who have supported and voted for me. But honestly, I enjoyed myself so much I couldn't even conjure up feelings of disappointment when I felt I ought to! I'd had the attitude that I was going there to pretend to be an author for an evening; while I was there, I finally realised something - I AM an author! I wrote a book, an agent took it on, it was published and shortlisted for a literary award. This is real. My novel was published two years ago when my first baby was four months old and I've barely had time to draw breath since then, let alone contemplate how things have panned out. Well, they haven't panned out badly. I am still learning so much. I don't even consider myself a particularly good author, but I AM an author. I am getting there.

There were so many kind people on Tuesday who wished me luck, offered me encouragement, wanted me to win, told me I looked beautiful and treated me like a proper author. It was a magical few hours and the following morning, as I cleaned dirty nappies and dodged porridge being thrown off highchairs, I was glad that it was only a few hours. Genuinely. Glamour is fun, but real life is better. For one, real life is where the writing happens. I can't wait to get back to writing.

I didn't get to do an acceptance speech, but if I had I would've thanked all of you who have bought, reviewed and voted for my book. And I would've thanked the People's Book Prize for creating an award for authors like me - authors who had great feedback from big publishing houses but who were rejected over and over again for being unknown and for writing "quiet" books. So to all you unknown authors out there, keep going. One day your quiet book might also not-quite win a literary award. Or then again, it might really win! And wouldn't that be something?

*The event was meant to be broadcast on Sky News but actually wasn't in the end, although it was being filmed as if it was!
Posted by Chloe at 07:00 6 comments:

Excited to see a little piece in Dartmoor newspaper, The Moorlander, this week about my nomination for the People's Book Prize. Here I am in the top left, sharing a page with Ann Widdecombe, a hair and beauty specialist, and a job advertisement for a care home. Hitting the big time! 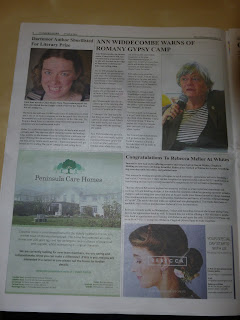 Voting closes for the People's Book Prize on Sunday and you can see the results announced live on Sky News on Tuesday 12th. So keep voting and spreading the word, please! I've bought a new dress and everything. With any luck it won't even have bits of rice cake and baby dribble on it - you never know.
Posted by Chloe at 21:06 3 comments:

Happy Friday everyone! I'm delighted to say that Amazon have selected The Art of Letting Go for their July promotions. For all of this month you can buy the e-book for only £0.99. So if you've been meaning to buy it but weren't quite sure if I was worth £3.99, now is your chance!

And don't forget, you can still vote for my novel in the People's Book Prize up until the 10th July. Please do! I'm so grateful for all your votes.
Posted by Chloe at 09:17 No comments:

Labels: amazon, promotion, the art of letting go, the people's book prize, voting
Newer Posts Older Posts Home
Subscribe to: Posts (Atom)
I'm represented by David Haviland at The Andrew Lownie Literary Agency. My novel, The Art of Letting Go, was published by Thistle Publishing in July 2014. Get it here!
Find out more at chloebanks.co.uk, hunt me down @ChloeTellsTales, or talk to me directly: hellochloe@chloebanks.co.uk