May: Writing, Not Writing and Writing by Hand 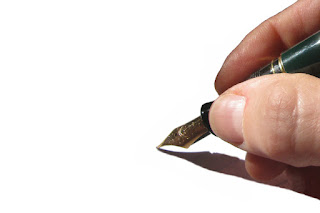 At the start of May I began to write the second draft of my novel-in-progress. My plan was to try to write a full draft by the end of the year. In real-terms that meant writing about 3000 words a week. As a full-time mum that was a daunting target but I was ready to give it a go. It hasn't been the smoothest of starts.

I wrote the first chapter. I didn't like it. I couldn't even say why. There was something wrong; the voice wasn't there somehow. I tried again. And again. Three weeks into May and I hadn't even got 2000 words done, let alone my target of 9000. So I tried something different. I wrote by hand.

If I was to create an ideal writerly-life, I would write all my novels on sunny mornings in a summerhouse at the bottom of my perfect country-cottage garden. There would be a sea-view, of course, and I would be writing with a fountain pen in Moleskine notebooks. Later I would sit at my vintage typewriter and type it all up, sipping tea from a chintz teacup. In reality, I sit crammed into one end of our living room, with a view of two baby monitors, praying the boys don't wake up from their naps before I've finished my train of thought. I write on a computer because it's conveninet in a number of ways (including the fact that I taught myself to touch-type). And, despite being British, I can't stand tea.

The only thing I do by hand is plan. I find it easier to organise my thoughts if I can scribble and draw arrows and tap my pencil on the desk. I realised that I also plan by hand because I feel more creative - more in tune with what I'm trying to write. So, desperate to get my novel underway, I started to write the first chapter in pencil in a cheap exercise book. It worked! It took longer, but for some reason, the voice of my main character began to come out. When I typed it all up I asked my husband and my friend/chief-reader, Jenny, to have a look at it (a sign of how insecure I feel about my writing - I NEVER ask people to look at just a snippet of an early draft!) and they gave me the thumbs up to keep going in the same voice.

I haven't done 12000 words this month. I hope to get another thousand or maybe even two in at the beginning of next week, but so far I am only on 5800 so I won't hit my target. I am however, underway. Full steam ahead from here! I won't be writing the whole novel by hand, but I definitely WILL be going back the pencil and paper method whenever I need to sort anything out, or overcome a bump. Do you write by hand? How do you overcome hurdles in your writing path?

I will probably try to write a monthly update on here. If some of you could pretend it's fascinating and cheer and wave pompoms from time to time, that would help me enormously, thanks.And don't forget that voting is open in the People's Book Prize - please vote for my novel The Art of Letting Go in the fiction category!
Posted by Chloe at 14:23 5 comments: 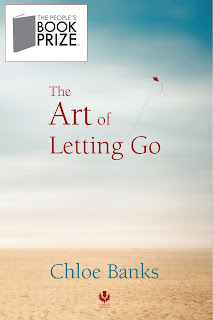 The time has come, dear friends. Voting has opened in the People's Book Prize 2015-2016. My novel, The Art of Letting Go, is a finalist in this year's award and I need your vote!

The People's Book Prize is a nationwide award that aims to showcase "new and undiscovered works". The results are entirely voted-for by the public and will be announced during a live Sky News broadcast in London on 12th July.

There have been many, many kind readers of this blog who have cheered and encouraged me along the way. Lots of you have bought, read, reviewed and recommended my novel and I am so grateful. Many of you also helped get me on to the shortlist by voting in the earlier rounds. Please, help me again!

If you voted for me in the first round you can now vote again. If you didn't then now's your chance! And it's not too late to buy or borrow a copy of my book and get reading! You can find the voting page with instructions here. Voting is open until the 10th July.
Posted by Chloe at 20:03 5 comments: 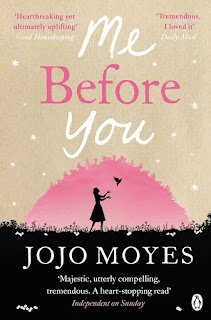 The idea that success is whatever lies just out of reach cannot be unique to writing. The feeling of being satisfied with what we've achieved if we only reach the next milestone is, I'm sure, something everyone understands. With writers it is easy to always be straining for the next goal: an agent, a publishing deal, a three-book deal, a place in the bestsellers, a proper income, a Hollywood blockbuster movie deal. Therefore I'm not sure if reading the story of Jojo Moyes in Good Housekeeping magazine this month is encouraging or discouraging.

Jojo Moyes had published eight novels.To many of us, that screams of success! To have an agent and to be traditionally published eight times would be a dream for so many writers. But she wasn't considered successful at all. None of her books had sold well and her publisher didn't want to publish her again. Another publisher told her agent that they thought her career was probably over. Then she had an idea for what she feared would be her final novel. That novel - Me Before You - ended up selling more than five million copies (so far!) and was turned into a major Hollywood film.

At first I was a bit discouraged. Jojo nearly didn't have the success she's had because it took too long coming. This wasn't someone who took wrote several novels before finding a publisher but then had a great career; this was someone who'd done the "hard bit" and found an agent and publisher (as I have) and still struggled.

Then I decided to be encouraged instead. Jojo mght have had to wait for her ninth novel to be successful in the eyes of the world, but it did happen on the ninth. And, who knows, if it hadn't happened then, maybe she would've kept going anyway. Maybe her 10th would've been the blockbuster, or her 15th. She kept on going.

Most of us, of course, will keep on going and never write a novel that sells anywhere near the number of copies that Me Before You has. But we will keep going too. I will keep going. I'm struggling to write my second novel. I'm finding it dispiriting at times, and it might end up terrible and unpublishable. And it might not. It might be OK. It might be brilliant.

My friend Dan, published a great post on not giving up on his blog the other day. My favourite bit was his plan to get back to writing (following a disappointment) after a cup of tea and a sulk. I think that encapsulates the writing life perfectly: Write. Don't succeed. Sulk a bit. Write some more. Repeat. Succeed (maybe).

Calling all Australians and inhabitants of Australia! My novel, The Art of Letting Go, is now available for $1.99 on Amazon Australia for the rest of this month. Catch it while it's cheap!

The Art of Letting Go is currently nominated for The People's Book Award and has been called many lovely things, including beautiful and masterly (I know - check ME out)! I'd be so glad if you would spread the word among your antipodean friends and consider reviewing the book on Amazon for me. Each sale, recommendation and review really does make a difference.
Posted by Chloe at 21:37 No comments:

Labels: amazon, australia, promotion, sales, the art of letting go
Newer Posts Older Posts Home
Subscribe to: Posts (Atom)
I'm represented by David Haviland at The Andrew Lownie Literary Agency. My novel, The Art of Letting Go, was published by Thistle Publishing in July 2014. Get it here!
Find out more at chloebanks.co.uk, hunt me down @ChloeTellsTales, or talk to me directly: hellochloe@chloebanks.co.uk