Doreen and the National Trust Terrorist 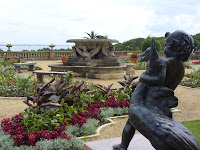 Avid fans of this blog might remember my post a few months back outlining some of the things I had been writing at the time. One of those things was a short story romance that I wrote when I was getting annoyed with the short story that I had been writing for weeks and wouldn't stop being terrible. Well, I am delighted to say that my story, Doreen and the National Trust Terrorist, was runner-up in the Short Story Radio Romance Award. I was pleased enough with this anyway, thinking that it meant I was probably in the top 6-8 entries, but it turns out that they were only choosing a winner and a runner-up so this is actually second place. Who would have thought?! My prize is a critique from the judge - a ex-magazine editor and editorial consultant.

I feel a bit like I've cheated I have to admit. I've never written romance before and it's not really a genre I've read either. I entered for a bit of light-hearted relief. The idea of a group of pensioners running round causing mayhem at National Trust properties came to me a couple of years ago when I was out walking, but despite all my best efforts I couldn't get it to work. Then when this competition came up I thought I'd have a crack at turning it into a romance and here we are... Bizarre!

Unless any writers out there know any different, I suppose as I own the copyright I can put the story up as a page on this blog now the competition is over. So I may well do that sometime. It's not the best thing I've ever written - and it's quite "women's magazine" which is not a genre I usually write - but it's one of the few happy things I've managed to get to work so I have quite an affection for it.
Posted by Chloe at 17:51 2 comments: 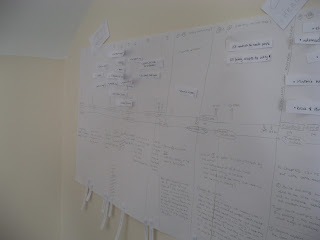 In the last few weeks I have read and written chapter plans for Northern Lights, re-read my novel, decided I quite like it, spent hours cutting out all the unnecessary rubbish and pulling apart the structure and even longer sticking it back together again. I have a horrible feeling that I'm nearly ready to start re-writing. I am managing to put off this feeling so far by working on the short story that I have been commissioned to write by Bamboccioni Books.

The hardest part has been deciding what to reveal when. Being set in six different worlds there is an awful lot of information that it's necessary to get out there. This is why the average word count for children's fantasy novels is considerably higher than non-fantasy for the same age group. In my original draft I did the classic insecure writer thing of trying to get all the information in as soon as possible. I didn't trust my reader to work things out for themselves - I wanted to be sure that they completely understood how my worlds work. I've learned my lesson. Firstly, the reader does not need to understand everything about your world (or your characters or the background to the story...), they only need to know enough for the book to make sense and, secondly, people are intelligent enough to join the dots between what you tell them and what they need to know.

So, having written out a full time line of the book (and discovering that the action in the book takes place over 40 days and nights - how charmingly biblical), I wrote all the things that need to be revealed to the reader on individual scraps of paper and have then stuck them on to it at the appropriate point of revelation. This has allowed me to make sure everything gets said by the time the information is needed, but means I can spread all the "telling" out through the book without worrying I'm going to forget something. It's making the wall of my study look like something from Mission Control (see photo), which in a way, I suppose it is.

Having already written the first draft it has been really nice to plan the book again, taking into account the personalities of the characters and the unexpected twists and turns that happened along the way when I first wrote it. After several months away from it, it has been much easier to see its flaws and the places where things should be cut or rearranged, but also to find the bits that I'm actually quite proud of. Now, to pluck up the courage to write those most-dreaded of words: Chapter One.
Posted by Chloe at 14:29 2 comments:

A while a go I wrote a post about entering a flash fiction competition called Tinsel Tales. It's an odd little competition as each entry goes on-line as it is received and people can vote for their favourite. The top 10 are then added to the judge's own shortlist and she picks the winners. Well I'm delighted to say that she picked my entry out as her favourite! My entry was called Dead Cert and you can read it and the judge's report here.

About a week after entering the competition, another entry appeared using an almost identical plot device. At first I felt put out - my entry had been online for the world to see for a week, what was stopping someone reading it, liking the idea and writing their own spin on it. But then a nagging doubt kept playing at the back of me mind. It seemed too much of a coincidence - but isn't that exactly what a coincidence is? As I do when I'm annoyed about something I had a chat with God about it while out walking and came to the conclusion that it was arrogant to assume nobody else could have had the same idea at the same time as me. It was hardly in the spirit of Christmas to make a fuss. What I thought was an original idea turned out not to be so and I thought I had to accept that my chances of winning were gone. However, not only did I win, but the entry that seemed so similar came third! I shouldn't have doubted the judge's ability to judge on the writing only and not on silly coincidences.

Interestingly, only three of the entries with the top ten votes made it on to the judges top ten as well (I was 16th in the votes). I suppose this is because a lot of voting is done by family and friends of the writers and so it has an element of a popularity contest about it. It's an interesting spin on judging which I'm not a huge fan of, but you know what you are entering when you enter and I am hardly in a position to complain! This is the third year I've entered and I've always found it a well-run and friendly competition.

The question is: Are competition wins like buses? Will three come along at once?
Posted by Chloe at 14:32 3 comments:

And the Re-write Begins Here...

It's 2011. You may have noticed that yourself. Here's where I should be writing a post outlining all my resolutions for this year, but to be honest I don't have many. For the first part of the year I will be concentrating mainly on the re-write of my children's novel and of course, I would love to find an agent for the completed version but, other than that, I am happy to take the rest of 2011's writing as it comes. At present I have just a little tidying-up to do on a curent short story and I have to think of a suitable idea for an anthology of short stories I have been asked to contribute to, but then I will be a slave purely to the novel.

Back in November, I sent off the first 12 000 words of the novel to The Writer's Workshop to be critiqued by a professional author and was lucky enough to be assigned Sam Mills. It was a big decision, due to the expense of professional critiques, but I am so glad I risked it. I learned more about writing in reading Sam's report than I could have taught myself in a decade of muddling through. She was encouraging but did not sugar-coat her words. It was not her job to make me feel good but to tell me that I have some serious work to do, particularly around the whole area of structure. A lot of what she said were things that deep down I already knew, but it took someone completely impartial to give me a kick up the backside. It is not necessarily easy to give your work to someone to tear apart and criticise and I wondered how I would take the report, but when it arrived it only made me excited to get re-writing. Her criticisms were spot on, the things she liked were encouraging and the suggestions she made were interesting. Most importantly of all, I had been "marketing" my book as a Young Adult novel when it's actually for the 8-12 age group. This is a crucial bit of information to get right when approaching agents.

So, bring on the re-write! The next few weeks will involve reading another book for the same age group (probably Northern Lights as that's already in my bookcase) and studying the structure of the plot, then re-reading the draft of my own novel, ripping it apart at the seams and putting it back together again. I have a lot of planning to do, but I love planning so I will be in my element!
Posted by Chloe at 13:03 4 comments: