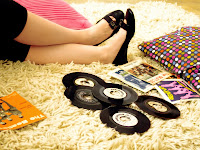 Where do we find God? Atheists may tell you that He can be found only in the deluded imaginations of the gullible. Other popular explanations include sickly-sweet sentiments where He exists in rainbows and the laughter of children, or alternatively, He manifests His presence in the tears of the oppressed. The standard answer is simply "Everywhere", which - true or not - only encourages infants to ask whether He is in the toilet.

In the Old Testament, the Israelites carried God around with them. When they stopped their wanderings and built a temple, God resided in the most holy part of that temple - a place where only the highest of the high priests could go once a year. This holy place was separated from the rest of the temple with a curtain. One of the documented phenomena occurring at the moment of Jesus's death was a tearing of this curtain, so that God was no longer separated from the worshippers. But where did He go? Did He suddenly expand from His box to fill the known universe?

For modern Christians, God's omnipresence and the ability to talk to Him whenever and wherever we like has made it possible for us to treat Him like a jukebox: we'll listen to what we want, when we want. By being "everywhere" did God intend for us to take that to mean that nowhere is especially holy? Did He mean that we no longer had to search for Him - that no more effort was needed? I don't think so. Consider if my favourite food used to be kept in a locked vault in a bank, but now it is given out for free on the shelves of the local supermarket. It couldn't be easier for me to find, but if I don't look at the shelves, then I may wander that shop for an eternity not finding what I want.

So where is God? Perhaps it is not that He is indescriminantly "everywhere" - an invisible element, floating around us. Perhaps it is that in His grace, He allows us to find Him anywhere - if only we can be bothered to look.
Posted by Chloe at 15:30 No comments: