Alice Oseman Then and Now 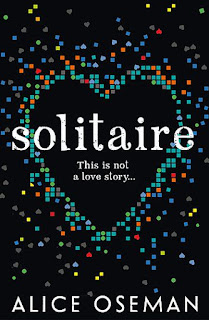 A few years ago, I'm not sure how, I ended up reading a new blog by a shy teenage girl. She was 17 and applying to do English Literature at Cambridge. It was her dearest desire and she was obviously mad about literature in general. She was also writing her own novel, citing The Catcher in the Rye as her biggest inspiration. Not many people were reading the blog so I ended up sending her a few comments and also reading the sample chapters of her novel. I tried to encourage her and give my opinion, but overall I remember just being very impressed with how good her writing was for somebody so young. (I know, I know... I'm sounding very old here!)

After a few weeks however, she announced that she hadn't got into Cambridge after all, and her blog just disappeared. I never heard from her again. I've wondered off and on what happened to her.

So imagine my surprise, when I was browsing The Guardian website and saw an interview with Alice Oseman. That name sounded so familiar and yet, at first I couldn't place her. It was only when I saw the photo of her face framed by gorgeous red hair that I remembered her. This was my introverted and talented young friend! But wait, why was she being interviewed by The Guardian? Yep, turns out that book she was writing at 17, Solitaire, was published two years later and acclaimed as a "Catcher in the Rye for the digital age". Now 21, and in her final year at Durham University, her second novel, Radio Silence, has just been published too.

I can't help but feel a little proud. I didn't have anything to do with her success, but it's nice to feel as if I spotted something in someone and was right! I'm so pleased for her. And, with two novels published she is now a more prolific novelist - and certainly more famous - than I am. Good for her!

The whole episode has served to remind me how fast life is when you are young. OK, I'm not ancient - I'm turning 30 later this year - but it still feels to me that I was only blogging with Alice a year or so ago. My life has been swept up in having a couple of kids and trying to come up for air occasionally, but for her, the time between being 17 and 21 must seem a lifetime.

Have you read one of Alice's books? Ever met someone "before they were famous"?
Posted by Chloe at 14:24 2 comments: 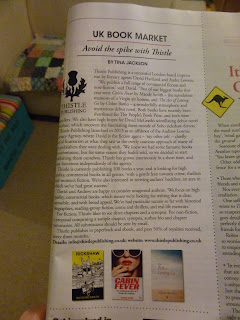 I had a surreal experience the other day while leafing through Writing Magazine. My eye was drawn to a familiar picture on one of the news pages... the cover of my novel, The Artof Letting Go.

The article in question was a snippet about Thistle Publishing, who published my novel in July 2014. It was mainly written to provide writers looking for publication with the information about the company. (Although I have an agent, Thistle do accept submissions from unagented authors, in case any reader of this blog is gearing up to submit their novel anywhere!) However, the quotation in the article from the publisher included these rather lovely lines:

"Two of our biggest books this year were Cabin Fever by Mandy Smith - the scandalous memoirs of a Virgin air hostess, and The Art of Letting Go by Chloe Banks - a wonderfully atmospheric and mysterious debut novel. Both books have recently been shortlisted for The People's Book Prize, and both were bestsellers."

It was a pleasant surprise to see my novel mentioned in the UK's bestselling writing magazine - especially as a success story for my publisher and as a bestseller!
Posted by Chloe at 13:53 5 comments:

Labels: bestseller, publicity, success, the art of letting go, thistle publishing, writing magazine
Newer Posts Older Posts Home
Subscribe to: Posts (Atom)
I'm represented by David Haviland at The Andrew Lownie Literary Agency. My novel, The Art of Letting Go, was published by Thistle Publishing in July 2014. Get it here!
Find out more at chloebanks.co.uk, hunt me down @ChloeTellsTales, or talk to me directly: hellochloe@chloebanks.co.uk