On Baring the Soul

On Tuesday, I received the critique for my children's novel from SM, courtesy of the Writer's Workshop. I promise I'm not being paid for this, but can I firstly say just how impressed I was with WW. The manuscript got lost in the post and so they offered to print it out for me for free to save time and postage. Only a week after that, I recieved my critique. Good work!

Getting a professional author to critique the novel you've spent so much time and energy on is a bit like standing naked on a stool and asking a supermodel if you look beautiful. You feel very vulnerable! The worst thing that could have happened was being told that I really didn't stand a chance of ever getting it published. The second worst thing would have been to be told that it was too complicated and I needed to take out one of my worlds (there are 6 in the book). Thankfully, not only did neither of these things happen, but SM was actually very encouraging. She was very enthusiastic - excited even - about it and wrote a very long report with both general pointers and page-specific advice. Best of all, she seemed to think it did have the potential to be published one day and was keen to help me get to that point.

That is not to say of course that she thought it was perfect. Far from it. But she did at least only think that one more draft would be needed before it was ready for agents. There are three or four places in the book where she thinks I could do something more with the plot and I am beginning to work through some ideas for them, but the biggest thing I need to think about is adding depth to the fantasy elements of the book - draw more vivid pictures of the six worlds, add "more of the quirky". Although writing it all again is a little daunting, I think this could be quite fun. She had some great ideas and I've got some more of my own. Yet again, I am so bowled over with how much a critique can help. As my husband said, when someone who knows what they're talking about suggests something it seems really obvious!

So, I have some work to do. This final (I hope!) version will ironically contain a lot more plot changes than the last version, despite needing less re-writing in other ways. Basically, in the last re-write I had to alter the overall structure and improve on my writing style (which I seem to have done with some moderate degree of success), whereas this time I am just working on the "storytellling". I might give myself another few weeks breathing space before I launch into it all again. In the meantime I hope to work on another short story, start my writing course and, every now and again, re-read the complimentary parts of my critique just to remind myself that there is hope for me yet! 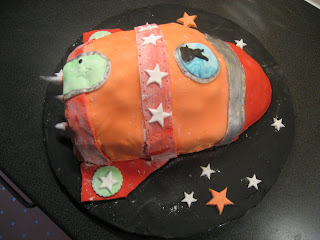 PS: I couldn't think of a suitable picture so here is one of the birthday cake I made for my husband this week. it doesn't look quite like the one in the book, but I'm quite pleased with it!
Posted by Chloe at 10:32 8 comments: