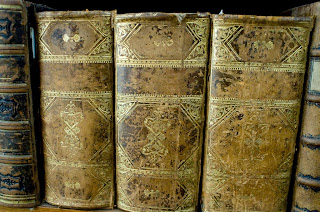 Today, Margaret Atwood became the first author to submit a work into the Future Library. The Future Library is the idea of a Scottish artist, Katie Paterson, and involves one book a year being held in trust in a library in Oslo until 2114 when all 100 books will be printed. 1000 trees have been planted just outside Oslo to provide the paper for the printing process in 100 years' time.

I love this idea. The thought that every year a writer - some of whom haven't even been born yet - will produce a work that nobody will read for up to 100 years is wonderful. I can't imagine what it must be like for Margaret Atwood to know that something she has poured her creativity and time into will never be read in her own lifetime, but how special to be part of something like this. (I suppose it will be less romantic, but also less frustrating, for the last few authors who contribute books, as their works will be read in their lifetime.)

I'd love to know what Margaret Atwood has written - do you think she's written about the not-too-distant future as she did in The Handmaid's Tale? We'll never know! I wonder what the readers of 2114 will think of her. I only came across her work a couple of years ago myself, and have only read three or four so far, but I love her writing. I always tell people when I grow up I'd like to write like her!

It got me wondering what we might be reading now if some famous works of literature published in 1914 or 1915 were due to be published this year for the first time instead. Here are just a few of the works we'd be discovering...
Any of your favourites in there?

1914/15 were also the years where the world was introduced to Jeeves and Wooster (PG Wodehouse) and when the Wizard of Oz (L Frank Baum) and Anne of Green Gables (LM Montgomery) series were going strong. It was a time of Rudyard Kipling, GK Chesterton, Thomas Hardy, DH Lawrence, Virginia Woolf, HG Wells, Hilaire Belloc, Arnold Bennett, WB Yeats, Arthur Conan Doyle and TS Eliot - which makes it seem like both ancient history and a golden age for literature! I wonder if the first people to read Margaret Atwood's secret novel will feel the same about 2014/15?

Which current authors would you nominate to write a book for the Future Library?
Posted by Chloe at 14:05 2 comments:

On our way back from holiday last weekend, we stopped off for a walk at Stourhead - one of the most famous gardens in the UK. Next to the new hand-driers in the toilets was a sign explaining their use, and on that sign was a grammar war. Here it is... 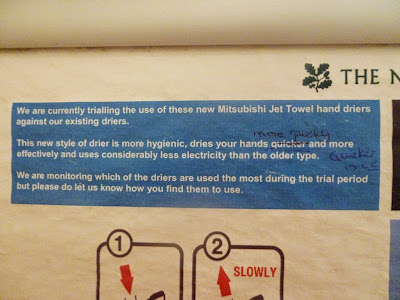 If you can't see that image, let me explain. The phrase 'dries your hands quicker', has been changed to 'dries your hands more quickly' by somebody. Somebody else, however, has added a note to say that 'quicker is OK'.

This is a grammar rule I get confused about a lot. Which words you can modify by adding an -er, and which you have to modify with a 'more' I get wrong a lot in conversation. Is there a definite rule, or is it a matter of just knowing which -er words exist?

The day after we got back, we were in church and I spent an un-Christian amount of time pondering the grammatical correctness of the words to one of the hymns we were singing. Perhaps you can help me with this one too. The words we sing are:

My instinct was that the last sentence should be, Is it me, Lord? But am I right? My logic is that I wouldn't answer the question, 'Whom shall I send?" with the words, "Send I." I would answer "Send me." (Or "Don't send me", of course!) So the correct word in the full lyrics should be me and not I. What do you think?

And for reading to the end of a short but pedantic post, you shall be rewarded with another photo of Stourhead - one that is perhaps more indicative of the overall atmosphere! 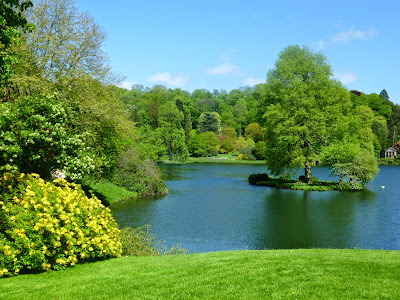 Last week I brought to you some quotations from Baroness Ruth Rendell who died earlier this month. I mentioned that her death was not marked as much as it might have been as it occurred on the same day Princess Charlotte was born. I also mentioned that CS Lewis and Aldous Huxley had a similar unremarked passing, as they both died on the same day that JF Kennedy was assassinated.

I've quoted from CS Lewis many times on this blog before, so I thought maybe it was Aldous Huxley's turn. I read Brave New World in my teens and was really taken with it. I heard it on the radio again recently and was still absorbed by his dystopian vision of the future.

Here is a quotation appropriate for a writer, taken from that novel:

"Words can be like X-rays if you use them properly - they'll go through anything. You read and you're pierced."

I hope the words I write one day will have the same piercing effect that his did. I can dream, right?!
Posted by Chloe at 07:00 No comments:

Australia, I'm Coming For You!

Another snippet of good news about my novel, The Art of Letting Go. Following promotion in the UK in February, the e-book version is now being promoted in Australia. For this month only, you can buy it from Amazon Australia for AUS$0.99. I have virtually no contacts in Australia myself, so I'd be grateful if those who do have friends or family out there, could spread the word! Sales and, more importantly, reviews are gratefully received. Here's where you can find it.

Talking of reviews, I now have 97 reviews on amazon.co.uk, or which 59 are 5*. I'd love to get to triple figures, so if you've read and enjoyed my book, please consider reviewing it for me! Thank-you.

Following the death of Sir Terry Pratchett recently, it's already time to say goodbye to another of the UK's most-loved writers. I have to say I don't know a lot of Ruth Rendell's books, but the ones I have read or heard on the radio are brilliant. She was a fantastic crime writer, author of more than 60 books, who was still writing into her 80s.

With the General Election less than a week away and Princess Charlotte born on the same day, Ruth Rendell's death passed with less attention in the media than it might have done. In a similar way, the deaths of writers CS Lewis and Aldous Huxley went almost unremarked at the time occurring as they did on the day President Kennedy was shot. I shall leave those two for another week. For now, here is a rather simple and lovely view of marriage from Ruth Rendell:

"Maybe being married is talking to oneself, with one's other self listening."

And I also loved this take on having an ally in the world - I think it applies to spouses and best friends alike:

"There are no words to express the abyss between isolation and having one ally. It may be conceded to the mathematician that four is twice two. But two is not twice one; two is two thousand times one."

Perhaps neither of those quotations are typical of a crime writer, but they were the ones I liked best!
Posted by Chloe at 07:00 No comments:

Labels: death, quotable friday, quotations, ruth rendell
Newer Posts Older Posts Home
Subscribe to: Posts (Atom)
I'm represented by David Haviland at The Andrew Lownie Literary Agency. My novel, The Art of Letting Go, was published by Thistle Publishing in July 2014. Get it here!
Find out more at chloebanks.co.uk, hunt me down @ChloeTellsTales, or talk to me directly: hellochloe@chloebanks.co.uk