This year I am listening to and writing micro-reviews for the five shortlisted entries in the BBC National Short Story Award. Why not listen along with me? 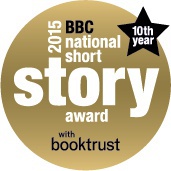 The second story on the shortlist is Bunny, by Mark Haddon. This is the story of a seriously over-weight compulsive eater who forms an unlikely friendship while house-bound by his weight and agoraphobia. You can listen here.

On the face of it, this story is right up my street. I've always had a bit of fascination about obesity and fitness and won a public speaking competition as a teenager, talking about the subject and the potential ways of combating it. Last year I listened to the audiobook of Big Brother by Lionel Shriver, which is also about a man who is massively overweight, and I enjoyed that. However, this didn't quite hit the mark for me.

The writing was great. As with Briar Road, the language was simple and straight-forward - nothing poetic or flowery. The characters were believable and I did find it compelling to listen to. The opening paragraphs I thought dragged on a bit and it seemed in danger to me of becoming a character portrait rather than a story, but it rescued itself just in time. The main downside to me was the "twist" at the end. It didn't ring quite true to me. It wasn't a cheat or anything, it was only that in such a short story I didn't feel the character of Leah was sufficiently developed enough for me to believe in her actions. It also - and I'm sure this was unintentional by Mark Haddon - was a twist that was very similar to something that happened in a mainstream TV drama I watched a year or two ago. I know there are no truly new plots, but that did allow me to guess what was happening and feel that it wasn't much of a reveal.

Overall, I enjoyed the subject matter and the writing of this story very much, but I didn't find the plot one that captivated me.
Posted by Chloe at 13:49