Waterstones and Amazon Sitting in a Tree... 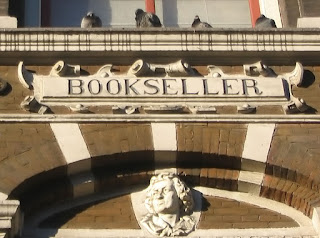 ... uncomfortably making small talk and pretending they get along just fine.

Did anybody else see this article on the BBC? It's the story that the new Managing Director of Waterstones has signed a deal with Amazon to sell its Kindle in store. Already unpopular for dropping the apostrophe from the name of the famous chain of bookstores, many people think James Daunts's most recent exploit is madness. Why sell the very product that is meant to be killing off the other products you sell?

It's this madness that makes me think he's on to something. The man is a former banker, used to making big commerical decisions. He could be mistaken, but I don't believe he's actually gone into this without doing some sums. He must really believe that it's the best thing for Waterstones. As he says himself,

"If they [the customers] choose to read digitally, then I have to get involved in that game."


If you read the article, you'll see that Mr. Daunt has some big plans for Waterstones - some of which sound really good. This isn't a man trying to kill off the biggest bookstore on the high street. But we're all fallible. Do you think he's made a big mistake?

I have to admit that I don't use an e-reader of any sort and I really love books as well as the stories they contain. But there's no point pretending digital publishing hasn't taken the world by storm in the last few years. And I'm pleased to hear that increased sales of digital books have not led to an identical decrease in physical books. At the moment it seems as if digital publishing is just encouraging people to read more.

This brings me to the controversial point of how we buy books. Both Amazon and Waterstones have been accused of killing-off independent booksellers. And, I confess, I buy nearly all my books on Amazon - often second-hand. I know that if I was an author struggling to make a living, I would want people to be buying my books new, but I only buy new when buying a present or when I know the author.

Last year, I think I bought one book from an independent store. I love the idea of independent bookshops, but I'm not doing all that much to support them. Just as many people love the idea of butchers and grocers, but still get all their food at Tesco. (For the record we get our milk, meat, eggs and veg locally!). I know I'll be partly to blame when independents don't exist anymore.

Do you buy from independents, chains, or online? Do you think it matters if we lose independent stores, or is it just hard cheese for the sellers? And do you buy more books now so many are available digitally?
Posted by Chloe at 09:00