This week I finished writing my novel, Thousand-Word Things. Allow me to introduce you to the nutshell version... 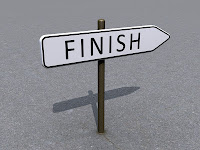 Written from multiple viewpoints, Thousand-Word Things is a story about art, lies and the normality of madness. Physics professor Rosemary Blunt is leading a double life, split between peaceful retirement on the Sussex coast and secret visits to her comatose husband in the next town. While still deciding whether he should live or die, the security of her secret is threatened by the arrival of an abstract artist who has his own reasons for not being entirely truthful about the past.

It's taken me a year to write this novel. I started last November with three short stories of mine which hadn't worked out as I'd wanted. I spent a month hacking them into some semblance of a coherent novel then wrote the first full draft at the beginning of 2012. It was so awful I nearly gave up there (turns out multiple viewpoint is very hard to write)! But here we are two further drafts down the line and I'm glad I persevered.

This time last week - after I'd finished, but before I'd done my final read-through - Thousand-Word Things looked something like this: 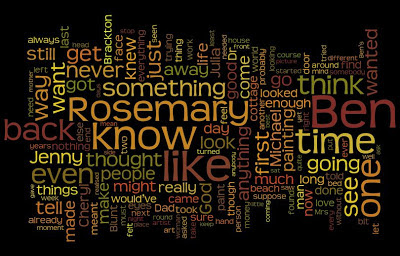 I'm sure most of you will have seen word clouds before. They are a visual representation of the frequency of words in a text. So if one word is twice as big as another, it appears twice as often in the novel. This one was created using the amazing (and free!) Wordle.

My two main characters are obvious, but the other big words surprised me. Apparently I used 'know', 'like', 'back' and 'time' a lot in this novel. I'd made a word cloud of the previous draft, in which 'like' and 'just' had been ridiculously big, so I'd been very careful with them in this version. In the case of 'like', not careful enough.

So after my final read-through, I took each of these words and found every use of them, cutting the ones I didn't need. I eliminated a few 'know's, 'time's and 'back's but the real cutting came with the use of 'like'. It was quite a revelation to me how we use one little word in so many different contexts. But it's a revelation that can wait for another post. I'll end this one with a quote from early in the novel:

Have you ever used word clouds to check your writing for over-used words? Which words do you use too much?